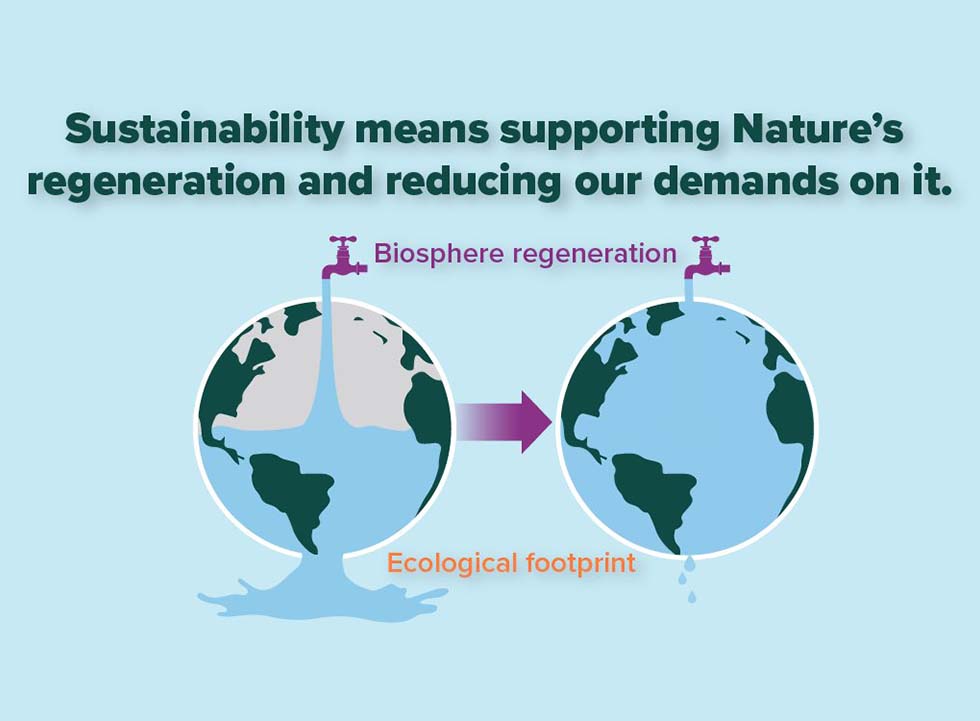 UNEP summarized the report with the image above on Twitter.

The Economics of Biodiversity: The Dasgupta Review was released February 1st after two years of extensive research. Overall, we are extremely pleased with the outcome. Published by the UK government, the report is a strong reference piece for grounding economics on an ecological foundation. It confirms the significance of ecological overshoot and helps build the bridge that links climate, biodiversity, and the human economy.

Overshoot is emphasized throughout

The Dasgupta Review is highly validating for those of us concerned with ecological overshoot. The carefully crafted report emphasizes this one critical point: Overshoot is not only driving down biodiversity, but also the human economy. It makes clear the need to stay within the regenerative capacity of the planet. And the implications are unambiguous: we measure the wrong things, and we undervalue nature.

This message speaks directly to the importance of Ecological Footprint and biocapacity accounting. The Review pushes this perspective more strongly than any other international report of its kind. It is even more powerful because it is issued by a finance ministry, and written by a respected economist, rather than a member of the environmental or science communities.

The Review recognizes that we are part of nature

The Review’s headline messages make particularly clear that moving out of overshoot is central to ecological health. It mentions repeatedly that humanity now uses the resources of 1.6 Earths, as calculated by the National Footprint and Biocapacity Accounts. Perhaps most crucially, it acknowledges that the economy is a subsystem of the biosphere. Here are some of the headlines:

“Our economies, livelihoods and well-being all depend on our most precious asset: Nature.”
“Ensure that our demands on Nature do not exceed its supply, and that we increase Nature’s supply relative to its current level.”
“Change our measures of economic success to guide us on a more sustainable path.”

A necessary shift in the biodiversity and climate conversation

For many of us, these messages seem obvious. However, they differ starkly from conventional biodiversity and climate discussions. The Review accepts the typically mentioned drivers of biodiversity loss: fragmentation and overuse of ecosystems, invasive species, pollution, and climate. It goes beyond the soft approaches of securing hotspots of conservation and seeking ways for human and non-human life to coexist in the same space. Going deeper, the Review acknowledges overshoot and that the ultimate pressure comes from this overarching, stark imbalance between human demand and what Earth can regenerate.

This recognition of the fundamental cause of biodiversity decline offers a big shift within the biodiversity debate. With very few exceptions, this clarity is seldom seen in the conventional environmental or academic literature on biodiversity. So, as obvious as it sounds to focus on overshoot, it is revolutionary for such an official document, especially as it was produced by a finance ministry.

The Review is sensitive to the reality that mainstream sustainability debates and economic development doctrines shy away from recognizing overshoot. As a result, the Dasgupta Review uses the term “overshoot” judiciously. It adheres to language that is methodologically neutral, and it avoids linking the discussion explicitly to earlier influential thinking like “Limits to Growth” (which was highly acclaimed, and still brutally–and mostly unfairly–attacked by economists). Even founding figures of ecological economics, like Herman Daly, are strategically left out.

The Dasgupta Review’s careful presentation to keep contrarians at bay is a crucial asset to the biodiversity-economy conversation. It gives it a far more robust grounding. After all, claims that the economy is a subsystem of the biosphere, and that the planet’s finite nature also contains humanity’s economic possibilities, has led to harsh and destructive pushback from mainstream economists and others over the last several decades. We are encouraged that there has not been visible pushback from the usual detractors. Even The Economist article aptly summarized and praised the report.

The Review represents a turning point not just in the economic literature, but also on how the significance of biodiversity and ecological health is discussed across disciplines. Undeniably, it is becoming a significant stepping stone for policy deliberations addressing climate, biodiversity, and the human economy everywhere. We are grateful to Prof. Dasgupta and his team for the constructive discussions with Global Footprint Network’s research team and soliciting our feedback during their report preparation.