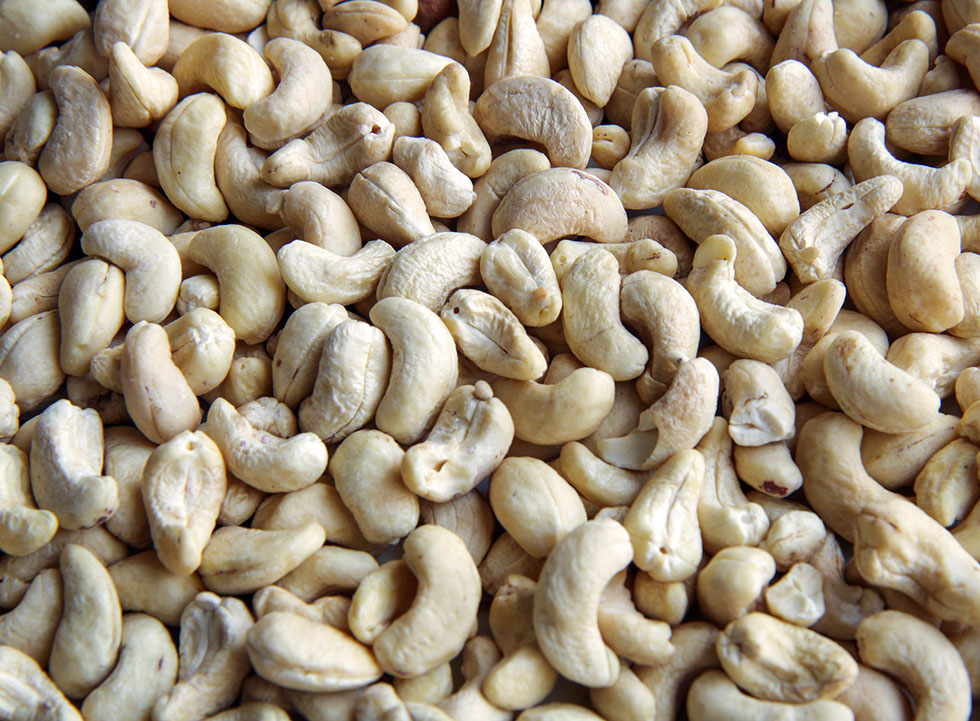 This blog post is part of the Ecobytes series, where we explore interesting topics from Ecological Footprint and biocapacity data conducted and authored by our wonderful interns. This week, Samaya Rubio dives into data on cashews. Samaya is a blended Master of Public Policy and Bachelor of Political Science at the California Polytechnic State University at San Luis Obispo. She is focusing on environmental justice issues in her degrees and hopes to spend her career making the world a more equitable and environmentally friendly place for everyone to live in. 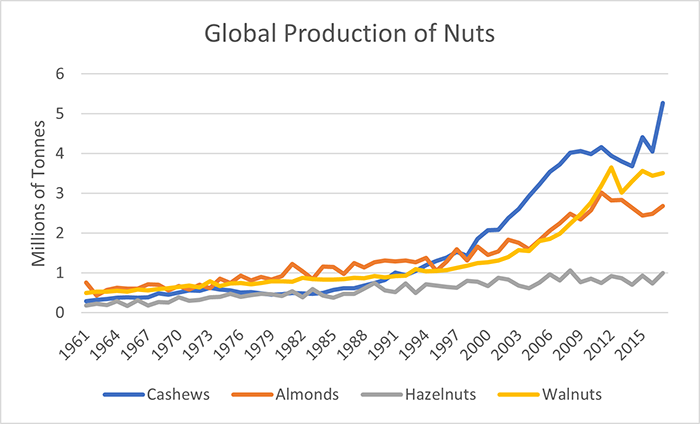 You’ve probably seen bags of cashews sitting on shelves at the grocery store, but have you ever seen the way a cashew grows? It’s pretty funky! The cashew nut grows in a shell on the bottom of a larger fruit called the cashew apple. In order to remove the edible (and delicious) part of the cashew and turn it into what you see at the store, it must go through a difficult and sometimes dangerous process. First, the cashew nut must be separated from the cashew apple, which itself has a variety of uses – as a sore throat remedy in Cuba and Brazil, a pain reliever for rheumatism and neuralgia, food for livestock, and an ingredient in many beauty products such as shampoos and lotions. Despite all these uses, most of the cashew apples produced are thrown away (1). 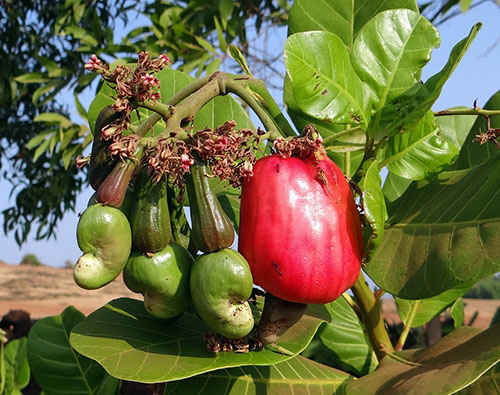 To remove the edible cashew from the cashew nut, the outer coating of the nut is repeatedly hit until it cracks opens, and the nut can be removed (2). Here’s the worst part: the outer coating produces a caustic liquid that burns the skin as the nuts are removed from their shell (2). Because of this, workers must use protective measures such as gloves, alkaline pot ash, and bandages to keep themselves safe from harm. Unfortunately, in many factories these protective measures are not provided, leaving workers vulnerable as they cannot afford to purchase protective equipment for themselves (2). When nut prices fluctuate, workers’ salaries also fluctuate, and in an industry that employs over 300,000 people in India alone, these fluctuations have a dramatic effect on local communities and the economy as a whole (3; 4). When making decisions at the local grocery store, I often look for labels like “vegan” or “cruelty free,” but none of these include harm done to people as a result of the production process.

According to the International Society for Horticultural Science, India is the largest cashew producer in the world, producing more than a quarter of all nuts produced worldwide (3). While India continues to be the leader in cashew production, other countries have been catching up: Vietnam, Brazil, and many African countries are increasing their cashew production to meet demand. Whereas India’s production is mostly dedicated to their domestic market, these new producers are largely geared towards international exports.

Global demand for cashew nuts has increased over the years, and this should not be surprising: there are many more mouths to feed and improvements in living standards means that many more people can now purchase expensive foods. What is surprising is the rate at which cashew production has increased: 32% between 2010 and 2017.

Cashews are produced at a higher rate than other nuts like almonds, walnuts, and hazelnuts, making their rise in popularity even more distinct. The ecological footprint associated with the production of cashews, which includes the cropland, built-up land, and carbon emissions required for their harvest and processing, has grown by almost 20% from 2010 to 2017. 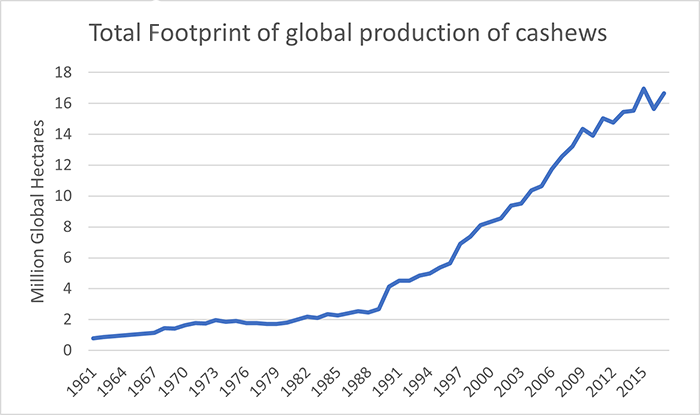 Over the same seven-year period, countries that produce cashews have also increased their exports dramatically, putting a strain on their environments while consuming countries reap the benefits of delicious nuts. If we consider three of the top exporters (India, Vietnam, and Brazil) we see an average of a 35% increase in the quantity of cashews exported.

What happened during those seven years? Did people wake up one day and decide that cashews were the best nut on the planet? I am more inclined to attribute this increase to the growing desire for plant-based foods. As I’ve grown up, I have seen people in my own circles shift to eating a more plant-based diet, whether that meant going vegetarian or vegan, participating in meatless Monday, or just limiting meat consumption as much as they could. The trend I have seen in my own circles is consistent with a global trend towards more vegan and vegetarian diets (although global meat consumption is still rising) (5, 6). Alternatives to animal products have been popping up in coffee shops, fast food chains, and the stock market (6; 7), which is a sign of their increased popularity, especially in Western markets. 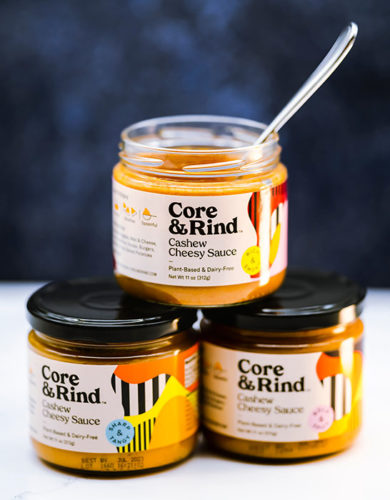 The result of this shift is increased access to alternative products like egg replacers, imitation meats, and (drumroll please) cashew dairy products. Cashew milk, cashew cheese, cashew butter, cashew ice cream, and tons of other cashew desserts are popping up all over the internet and in grocery stores. Cashews are a primary ingredient in alternative dairy products because they have a mild flavor and their high fat content helps them become creamy when processed. Making those products requires a lot of cashews! Based on an average of online recipes, it takes about 3.16 cups of cashews to make one gallon of cashew milk.  As more cashew dairy products hit the shelves, even more cashews will be produced to meet the demand for dairy alternatives.

Alright, we’re seeing this swap for cashew alternative dairy products, but the big question is: will cashews and other nut milks ever fully displace dairy milk? Many people who are making the switch to plant-based diets are using cashew products as an alternative to dairy products, but these two categories of products do not have the same nutritional value. When comparing the nutritional values of fat free or skim milk to the nutritional values of cashew milk on the USDA FoodData Central website, I found that cashew milk has more calories, less calcium, and less sugar than dairy milk (8, 9). Other nutritional categories were relatively similar (8,9). These milks cannot be completely substituted for each other, but they remain “close enough” in texture, and are easily substituted in recipes, smoothies, or cereal. 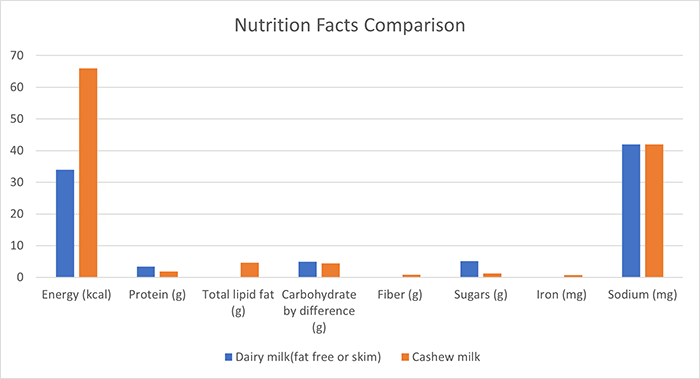 With cashew-based alternatives being a solid substitute for animal products, at least when it comes to texture and flavor, it seems that the popularity of cashews is here to stay. And as people continue to demand more cashews, whether in the form of plant-based alternatives or in their raw form, we will demand more from the people involved in production and from the land of producing countries.