We want all to thrive and be prosperous. And one planet is all we have.

“One planet” is neither a metaphor nor a goal. It is a description of our context. It is an acknowledgement that our planet has a limited ecological budget. Human demand (“Ecological Footprint“) now exceeds planetary biological regeneration (“biocapacity“) by 74%. This means that from January 1 to July 29, humanity used as much from the biosphere as the planet can regenerate in the entire 2021. Hence Earth Overshoot Day fell on July 29 in 2021.

Although the massive overuse of ecological resources still carries barely any financial weight, this overshoot cannot persist. The consequence of depleting resource stocks and accumulating wastes (such as carbon dioxide in the atmosphere) is that markets will be disrupted and unable to adjust smoothly. However, are we resigned to one-planet misery? Or can we choose to design our path to one-planet prosperity, where all thrive within the ecological budget of Earth?

One-Planet Prosperity turns sustainable development into something more specific. A simple way to measure it is to track its two dimensions: (i) the state of people’s prosperity and well-being, and (ii) the extent to which human demand fits within our planet’s resource budget. The former can be approximated by the Human Development Index (HDI), the latter with Ecological Footprint accounts (Boutaud 2002). Since both of these indicators can be applied to various geographies (globe, region, country, community), this framework can be used to track progress at any scale.

The United Nations considers an HDI greater than 0.8 to be “very high,” and 0.7 to be “high” human development. Universally replicable well-being requires an average per person Ecological Footprint which is lower than the biocapacity available on our planet per person. In fact, it needs to be significantly lower, given growing populations and recognizing wild species’ needs for biocapacity. For example, E.O. Wilson has suggested using just half of Earth’s resources in order to secure 85% of the world’s biodiversity (Wilson 2016). 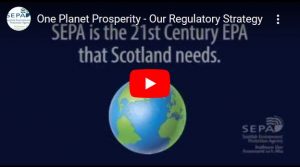 Recognizing that environmental compliance no longer suffices to ensure environmental and economic success in times of global overshoot, SEPA chose “one-planet prosperity” as the framework to reshape its regulatory mandate.

The government agency looked for opportunities to give credit to their partners in industry and government who have moved beyond compliance and are advancing one-planet prosperity. Also, they were keen to communicate the benefits of participating in advancing one-planet prosperity to new audiences. To do so, we have collaborated on many events, including for Earth Overshoot Day 2020 the launch of Earth Overshoot Day (with the University of Glasgow) and a seminar with MPs of the five main parties serving in the Scottish Parliament. For Earth Overshoot Day 2021, we produced a special contribution to The Herald, the world’s oldest newspaper. 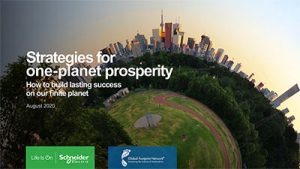 The initial goal of our collaboration with Schneider Electric was to enhance the energy efficiency leader’s ability to innovate for sustainability. The partnership soared on the shared vision of promoting solutions that #MoveTheDate of Earth Overshoot Day. As the collaboration between Global Footprint Network and Schneider Electric deepened, we examined to what extent business models can be congruent with moving humanity out of overshoot. We concluded that such business models are not only possible but essential as they help companies drive strategic innovation, stay relevant, and avoid becoming obsolete. This is also underscored by Schneider Electric’s CEO Jean-Pascal Tricoire.