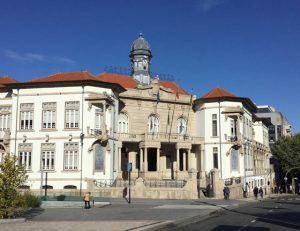 The fourth day of our Footprint tour in Portugal reached Vila Nova de Gaia today, where the official launch of the Footprint and biocapacity analysis for the municipality took place at the Town Hall. The meeting – attended by nearly 40 people from the municipality administration, local service providers, students, representatives of the civil society and the local media – was opened by Arch. Valentim Miranda, local councilor for the environment.

Arch. Miranda praised the involvement of Vila Nova de Gaia and commended the city’s mayor, Eduardo Vítor Rodrigues, for his decision to embark on the project. He also stressed the importance of innovation as well as the need to educate people on environmental issues in order to protect our environment.

The findings of the Ecological Footprint and biocapacity analysis for the municipality of Vila Nova de Gaia for the year 2016 were presented by Sara Moreno Pires, professor at the University of Aveiro:

An animated debate ensued, focusing on issues such as tourism (which affect sectors such as transportation that impact the Footprint of the municipality) and the accuracy with which the Footprint method can track it; commuting trends across the wider metropolitan area of Porto; ways in which local biocapacity can be maintained or increased; last but not least, electricity production and consumption.

The meeting concluded with two comments: